Drum roll, please….our season total so far for as what the Wrap Up! Project has received in donations and put out is……3,064 items!  You guys rock!

Let’s see if we can bring that up to 3,500 donations for the April scarf-bombing.  The March scarf-bombing has been cancelled, but April spring weather can still be cold, especially in the evenings.  We can do this!  Share this post on social media and get the word out, and get started creating scarves.  If you have stuff ready to go, get them to the drop off locations.  Let’s keep Lancaster and Columbia warm!

…..but we still need scarves!

As we can all identify for those of us who live in Pennsylvania right now, the weather can change on a dime, meaning, it can and probably will get cold again.  With that being said, we still need scarves!  The evenings can still be cold, and the days can be, too.

You can do it!  Get crafting and whip up some scarves?  Have some and need to drop them off?  Click here for our drop off points.

Be sure to spread the word that we need scarves, too!

Yeesh.  It feel like spring outside.  Is that going to hamper the Wrap Up! Project’s efforts?  NOPE!  It’s still cold in the evenings, and the weather could change on a dime.  With that in mind, we’re gearing up for our next scarf-bombing by having our February Tagging Party on February 27, 2017 from 7pm-9pm at Kegel’s Produce.  Bring a snack to share!

As usual, we will be tagging items for the next scarf-bombing, and many hands make light work.  It’s a great social event, too!  We’d love to see you there.

Let us know you’re coming on the Facebook event page.  We hop to see you there!

I want to apologize for not being more on top of things here, but I have a good excuse:  I’ve been sick.

I’m not still feeling great, but at least I’m able to update about the most recent scarf-bombing this past January 2017, right?  We were at the YWCA in Lancaster, PA, USA, as well as our usual stop at Columbia Presbyterian Church in Columbia, PA, USA.

One awesome thing about this past scarf-bombing?  WUP was joined by a couple of helpful students from Reidenbaugh Elementary in our efforts. Here they are pictured below.

Thanks for your help, ladies!  They are members of their school’s knitting club, and contributed to what WUP put out that night, too.  Read more about their efforts here, and support them!

I’ll leave you with a few more photos from the evening.  Be sure to check out the WUP Facebook page to see more videos of the event and to keep up to date on what we’re doing, too! 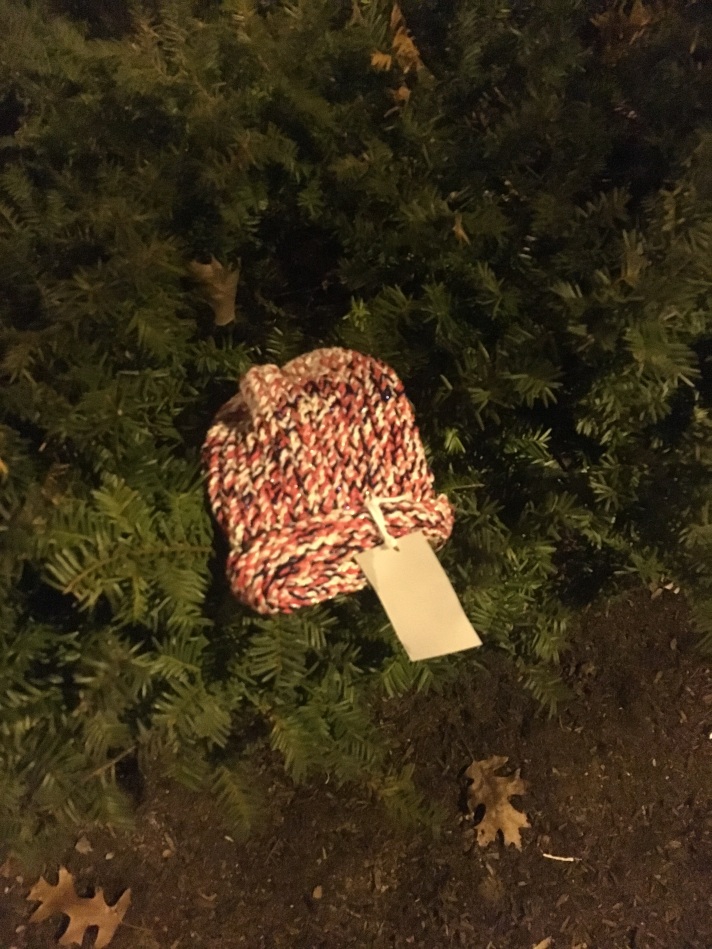 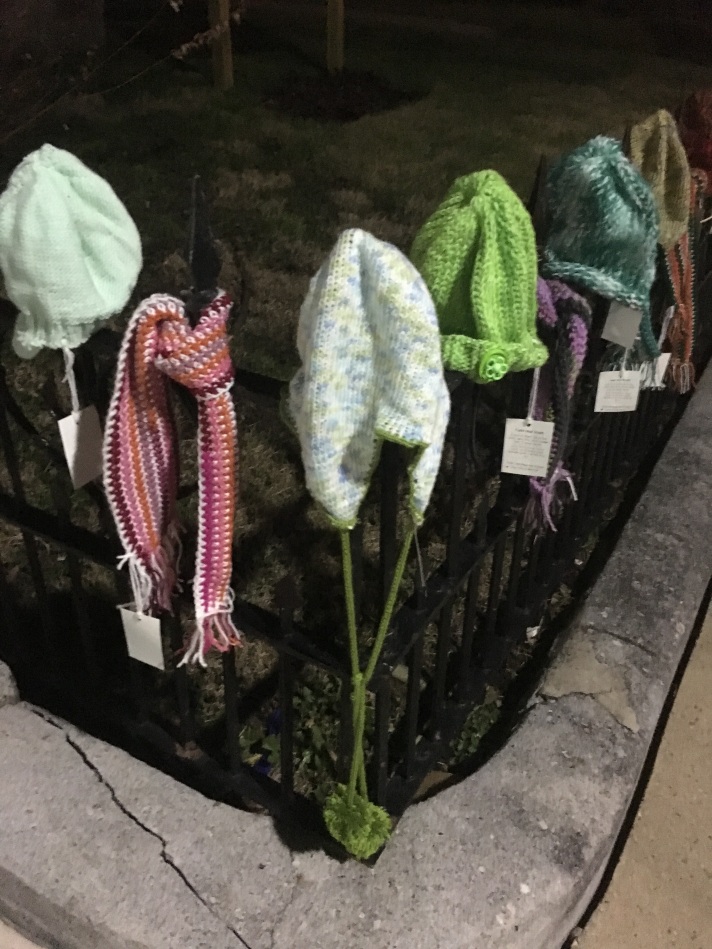 As for me, I promise, I’ll get better soon, and I’m sure many of you out there are going through the same thing with winter illnesses.  Be well!

I’m sure we can all agree that the weather has been relatively unpleasant lately, with it being all cold, and sometimes rainy.  That’s make what we do here at The Wrap Up! Project all the more important!  Speaking of getting ready, here are a few January events that that we need your help with.

The next tagging party will take place at Kegel’s Produce on January 26, 2017 from 6:30pm-9pm.  The more hands we have there to help tag, the quicker it gets done.  Bring along your current project and we’ll socialize, too!  Sign up here on the Facebook page for this event.

The next scarf-bombing will take place January 31, 2017 around the Lancaster YWCA.  A need for warm items has been expressed for that area, so we’re going to step up to the challenge and meet there.  After we are done in Lancaster, it’s off to scarf-bomb the Columbia Presbyterian Church, as is usually the case.  Let us know you’re coming on the Facebook page for this particular event.

That’s what’s happening with WUP in the next few weeks.  We hope to see you at one or both January events!  The more help we have, the quicker it goes, and we have a good time doing what we do, too.

Happy New Year from the Wrap Up! Project!  To start the new year off, we want to share some awesome statistics with you to show you how the project has grow, well, exploded, over the past three years.  We couldn’t have done it without your participation and support!

Ok, let’s see and take a look how we’ve grown!

During the first season of WUP, we had four scarf-bombings, and 524 items were put out in various places around Lancaster City.  Not bad for our first season!

For the second season of WUP, there were are total of five scarf-bombings, which included both Lancaster City and Columbia.  Ready for this number?  1132 items total were put out for people to take during the cold weather months.

Now, keep in mind, we are currently in the third season, but here’s what has been done so far.

That’s a total of 1002 items so far, and we know that many of you out there are still making and creating items for us to put out, and taking them to our different drop off points.

Thank you for being a part of the great project!  Watch and participate as we continue to expand and grow.  Keep an eye out for the next tagging party and scarf-bombing.  Our organizers are a bit busy right now, so hang tight, keep an eye out on the blog here and the WUP Facebook page.

Wrap Up! Project founder Angelia Reed has a great note here you need to read.  Originally posted on Facebook, she would like to share her words, here.

Today, I went through the donated items that will make up the January scarf-bombings.

You all amaze me! This season is our biggest season yet. When I started it, I asked for more donated items than we had ever put out because we were planning on adding a location. I wasn’t sure if we’d be able to do it. After all, we use hand-made items. Hand-made items take time & effort. I worried that I was asking too much of you all. I worried that everyone would burn out & lose interest in this project.

You all rose to the challenge and donated more than 600 items for our first scarf-bombing of this season! Over 600!!! You consistently keep us supplied with items to put out for those in need.

❤️ Many of you aren’t able to make it to the scarf-bombings. I want you to know that there are almost always people walking by as we scarf-bomb. They ask what we’re doing, and why we’re doing it. Some of those people then take items. All of them think it’s a wonderful idea, and think that the items are beautiful. Kids & adults are thrilled to have a hand-made item they can call their own. They are so thankful. I’m telling you this because I want you to know that YOUR contribution to this project is making a difference in people’s lives. YOU are helping people. This project would not be successful without your contribution. Thank you.

We here at the Wrap Up! Project need your help in a big decision: choosing a new logo!

Here’s how you can help.  Below there will be a picture of possible logo designs.  In the comments, list your top three favorites in the order you like them best.  The most popular logo will be used, as well as the color scheme.

Drum roll please….here are the logos!

Also, don’t forget about tonight’s scarf-bombings in Lancaster, PA and Columbia, PA.  Hope to see you there!

It’s awesome to know that The Wrap Up! Project isn’t the only group out there doing scarf-bombings.  Here are 3 scarf-bombing stories to show you how this movement is growing around the country, and to encourage you to start a similar project in your area.

Over 400 scarves were left in a park in Manchester, New Hampshire, USA in the beginning of November 2016.  The photo above is from that scarf-bombing.  The story not only attracted local news outlets, but also CNN, as well, where the above photo is from.  Here’s a video of the news story WMUR ran about this event.

Heart Eternal wrote about the scarf-bombing phenomenon on their site, mentioning that Seymour, Indiana, USA has been doing scarf-bombing in their own community, and that it has become a trend in areas around them.  Read the article, and see how scarf-bombing is growing in the Mid West.

GoodNewsNetwork ran a story on their site about different locations scarf-bombing has grown, such as Easton, Pennsylvania, USA.  Detroit, Michigan, USA and Winnipeg, Manitoba, Canada also have scarf-bombing projects going on in those cities, too.

It’s so cool to see how scarf-bombings have been popping up all over the country, and internationally, too!  I hope these 3 scarf-bombing stories have inspired you, especially if there is a need in your community that would benefit from similar projects.

If you are like me, you are in the midst of holiday crafting and giving.  It’s a crazy time of year for crafters, and, hey, if you are looking for ideas, how about this post or this post for inspiration?

Still, this is a time of giving and generosity.  Many causes and groups are looking for donations, and it’s tough to decide which to donate to.  We would ask that you would consider WUP in your holiday giving, not just with your fantastic donations of handmade items, but we need monetary funds, too, to pay for things like tagging supplies and storage for all of great stuff that gets donated.

If you would kindly visit out GoFundMe page and consider us in you holiday giving, it would greatly appreciated and put to excellent use.

Have a great Thanksgiving!